Amsterdam 19th of June 2021 – Great New: Recent research by PwC has shown that the ambition from the Paris climate agreement to sell only fully electric new passenger cars in the Netherlands from 2030 is feasible. In this recent study, PwC took considered three different scenarios. In this article, we explain them in detail.

Right now about 20% of all newly sold cars are fully electric. This percentage needs to increase more than five times, in the upcoming ten years. This all to achieve the target of the 2030 Paris Climate Agreement. This may seem an unrealistic target, but according to PwC, there is no need to panic.

“We see no insurmountable obstacles to selling only new electric cars by 2030. In that year, it is expected that 1.9 million electric cars will be driving around in the Netherlands. From 2030, about 400,000 EVs will be added every year,” PwC said 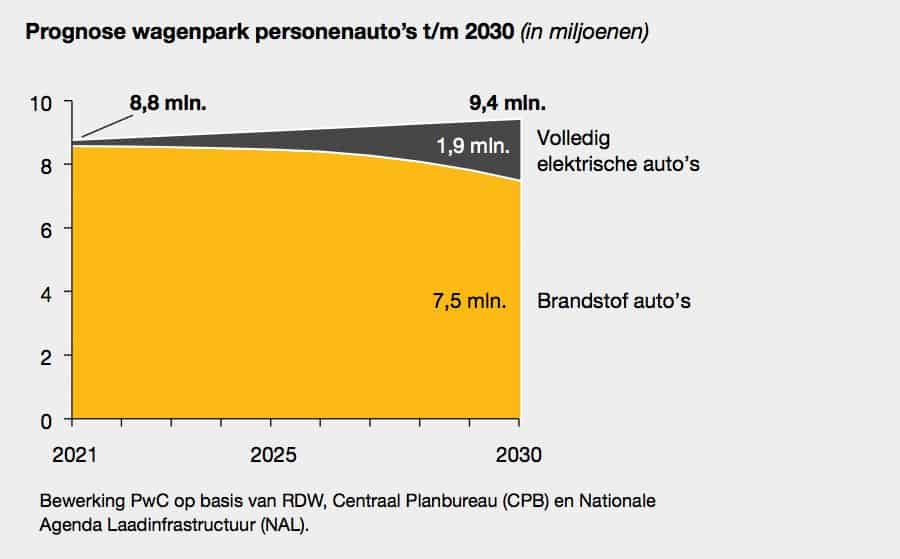 It is expected that by 2030 there will be almost two million electric cars on the Dutch highways. Unfortunately, there will also be about seven and a half million fuel passenger cars on our roads at that time. In short, in nine years, just under 20% of Dutch passenger cars will be electrically powered, while almost 80% will still use fossil fuels.

A little nuance
PwC states that the result of their research might turn out differently. The hopeful conclusion from the study should not lead to an EV industry being put to rest. On the contrary, the whole EV-Industry should work together to become an even bigger industry. If this does not happen, the future EV Driver will only have a small selection of EV’s to buy, with an expensive price tag. To prevent this from happening, it is therefore extremely important that the entire EV Market cooperated to achieve the 2030 climate goals. 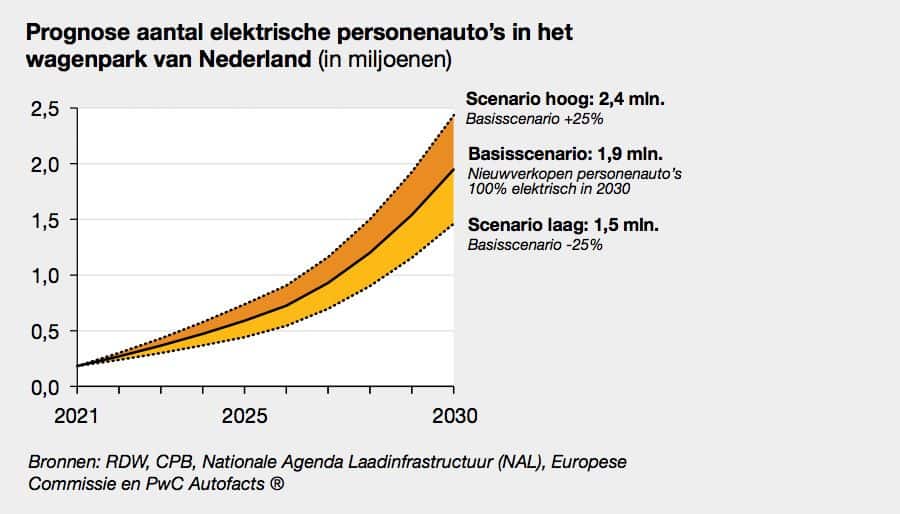 In the most pessimistic situation, there will be not 1.9 million but only 1.5 million electric cars on the road, according to PwC. In this situation, it is also unlikely that all newly sold passenger cars will be fully electric by 2030. This in turn slows down the growth of the second-hand market for electric passenger cars, which means it will take longer before the entire Dutch vehicle fleet is made more sustainable.

The development of the charging infrastructure
The development of the charging infrastructure also has a strong influence on the growth in the number of electric cars and the answer to the question of whether only fully electric passenger cars will be sold from 2030. According to the National Charging Infrastructure Agenda, 1.5 million additional charging points must be installed in the next nine years. This implies that on average 644 new charging points must be installed per working day until 2029. Over the past four years, an average of 105 charging points have been installed per working day; So there is still a lot of work to be done! Nevertheless, PwC concludes that installing one and a half million charging stations within nine years is feasible. 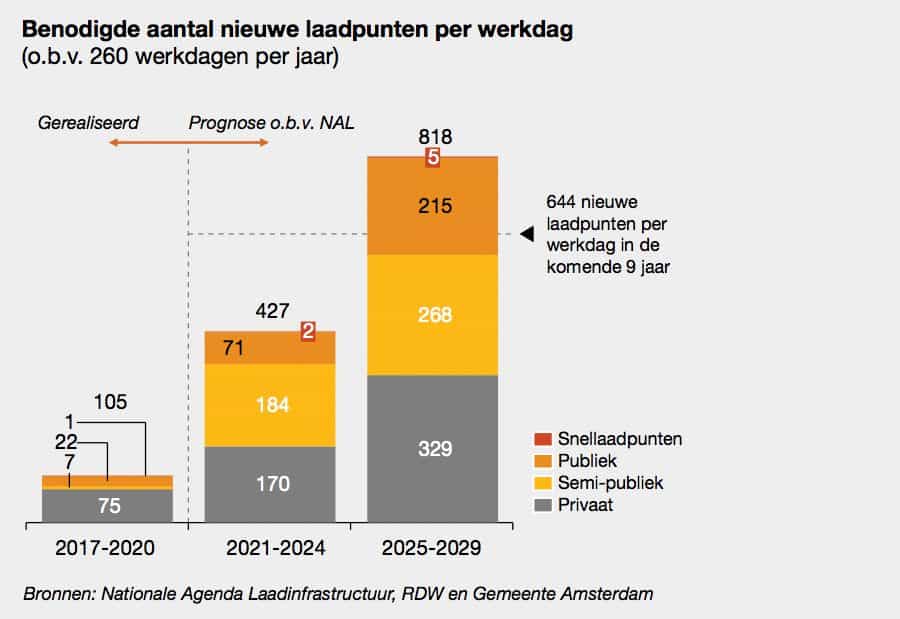 “The market is driving the construction of the charging infrastructure. Construction plans are at an advanced stage and investors are queuing up.”

Do you want to be able to manage your charging station?
Choose the E-Flux eMobility platform. With our eMobility platform, you are able to manage all the EV charging needs of your company from one platform. The unique thing about the platform is its independence. This makes it possible to combine several charge point brands while still having the ability to manage it from a single platform. This gives you the freedom to choose a brand without being stuck to it in the future. That’s the power of E-Flux!
We from E-Flux cannot wait to see what the EV future brings us. Are you looking for an EV and suitable EV solution? Click here!

VARO enters eMobility solutions through acquisition of stakes in E-Flux

Login and manage your charge card.

Login and manage your charging stations and charge cards.

Have you become a user of the platform before April 26, 2021, and has your account not been migrated yet? Then click on the 1st login button.*

Have you become a user of the platform after April 26, 2021, or has your account been migrated? Then click on the login button below.

*Not all users from before April 26 have been migrated to the new platform. You will be notified when this happens.

As an installer, manage your installed charging stations.

Have you become a user of the platform before April 26, 2021, and has your account not been migrated? Then click on the 1st login button.*

Have you become a user of the platform after April 26, 2021, or has your account been migrated? Then click on the login button below.

*Not all installers from before April 26 have been migrated to the new platform. You will be notified when this happens.